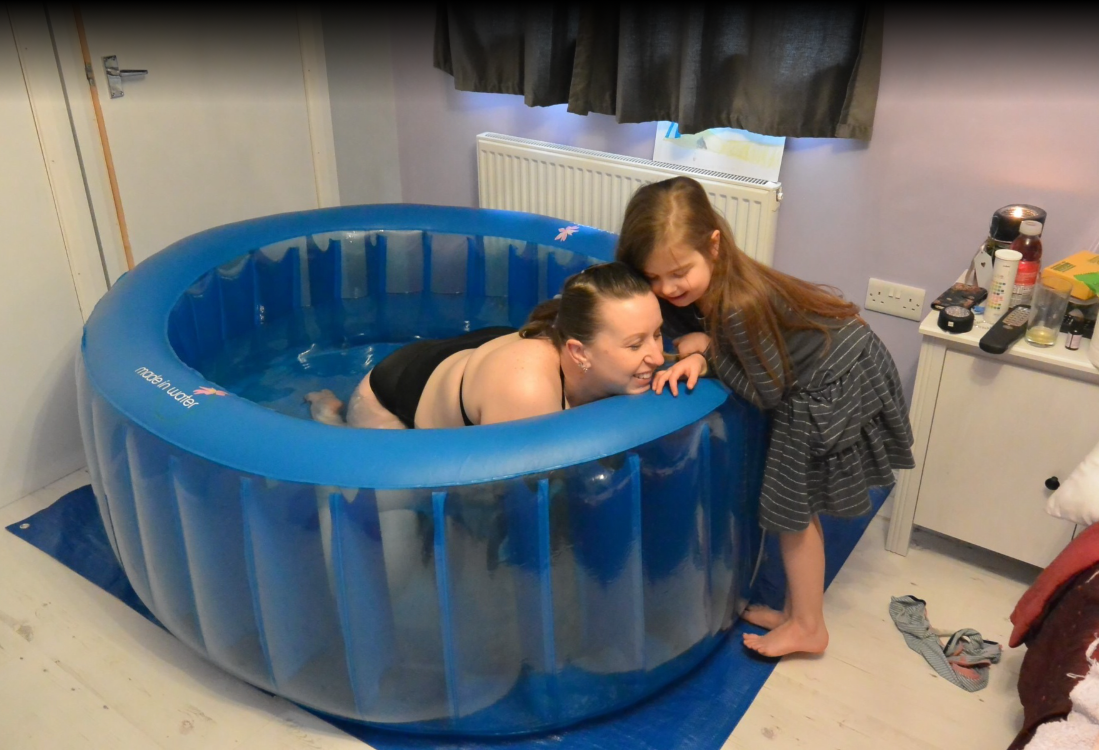 The birth of Thomas

Thomas is our third baby, we hadn’t planned to have him so soon but after donating eggs and it being implied that my fertility levels were dropping we decided to try sooner rather than later. We didn’t however expect to fall pregnant immediately, so I always joke that Thomas was our planned surprise baby. 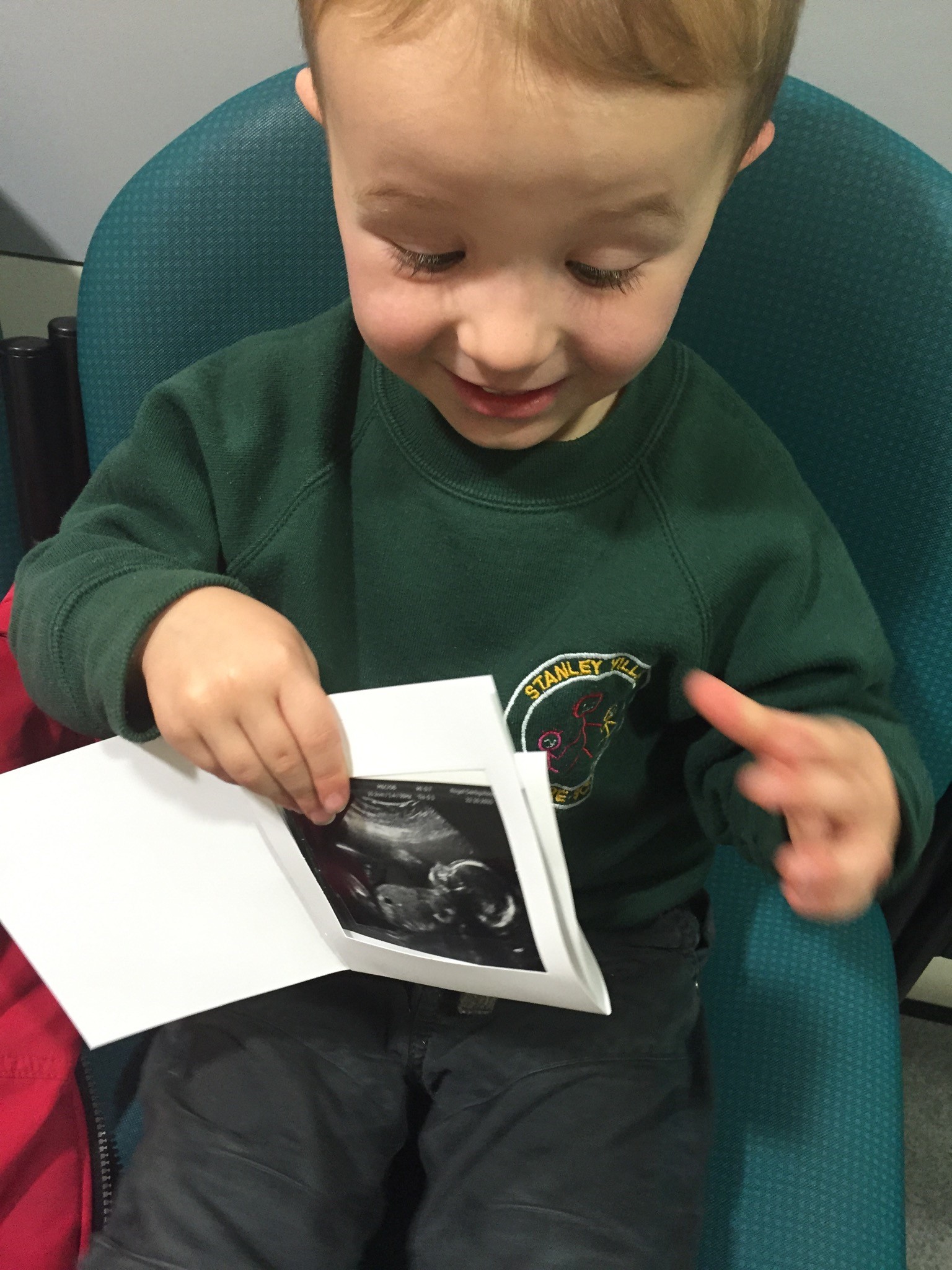 Having had a home birth with Harrison previously it was without question that I wanted to give birth to Thomas in our home, The pregnancy was fairly straight forward until around 36 weeks. I had agreed to a scan to check the size of the baby since my previous two had been edging on the larger side and I had refused the gestational diabetes test. We had the scan and I went armed to the consultant with all my facts and figures about why a large baby could still be born at home. I was not however prepared for a diagnosis of extensive polyhydramnios (where there is excessive amniotic fluid) – the registrar basically told us it could be down to gestational diabetes,  or there could be something wrong with the baby. He suggested doing a cesarean section the following day. I felt like I needed some time to absorb the information and make a decision so I agreed to blood test’s to check for diabetes and a further scan in five days. After the blood test results showed there was no diabetes all I could think about was what was wrong with my baby. I can tell you those five days where hell and I’m not sure I’ve ever cried that much in my life. The stress was unbelievable.

On returning for the scan the Sonographer started to take her measurements. The room went quiet and she looked concerned, she told us a second opinion was needed and left the room. I was lying on that bed and felt so awful dreading what information she had found. When the second sonographer came in she asked me if I had been leaking any fluid, of course I said no. She then told me that the amniotic fluid levels where within the normal range but it was such a dramatic difference from 5 days ago they couldn’t understand it. My baby was fine!!! Pregnant or not that night we had a glass of wine!! My amazing community midwife did some digging and it eventually was put down to a clerical error at the first scan. The consultant still suggested a hospital birth due to the size of baby but after all that stress there was no where I would rather be than home. 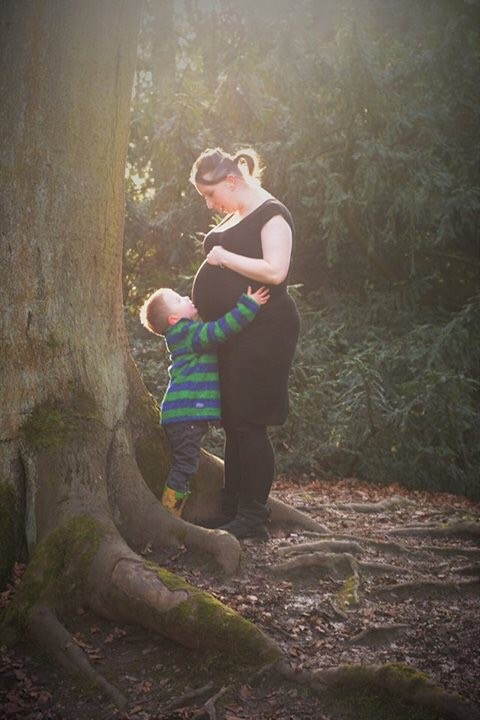 Now both my previous babies where born at 40+10 so again I kind of knew this one wouldn’t be early so I remained at work right up to 40 weeks. People thought I was nuts but I felt fit and well and trusted my body.

I go for a midwife appointment at 40+4 and all checks are done baby is low and engaged, My midwife offers to check my cervix and it’s thin and ready! She doesn’t conduct a full stretch and sweep as by her own admissions she’s not very good at them, or so she thought!

That night we carry on as normal, we take Eve to ballet, I’m sat in the waiting room and feel uncomfortable. No contractions but damn uncomfortable. My friend tries to make light conversation while our girls dance but I don’t want to talk. I begin to drive home and feel as though I shouldn’t be driving. Now looking back I was clearly in early labour but at the time I was also in denial.

That night I get in the hot tub to ease the aches and pains and I head to bed for an early night. I’d always joked about spending some of my labour outside under the stars in our hot tub. The warm water helped me relax and got rid of any tension and I fell asleep easily by 9pm.

At 2am I wake for my usual midnight wee, everything feels normal, I actually felt gutted nothing was happening – it usually takes me a while to get back to sleep but at 2:20am the penny starts to drop. I feel a mild contraction. I start to doze off. Interrupted 10-15 minutes later by another, and again and again. I decide not to wake my husband. This is a dance me and baby need to find our own rhythm to before we involve others.

By 5:30am I’m having to breathe through contractions, I still don’t track them but I’m accepting more that ‘this is it’. At 6:45 Eve, Harrison’s and Bobs perfectly synchronised body clocks wake them up. I tell Bob I don’t think he will be going to work today. Eve wakes up poorly so we ring in school and she’s off sick, she genuinely was poorly but I know people at school will be talking.

By 8am I snuggle on the sofa with a poorly Eve, and my snuggly Harrison and Bob milling about his morning chores. That connectivity with my family is what I needed to get things moving along. That oxytocin. That love and safe feeling when my family are together. The contractions ramp up a gear and by 8:30 I feel it wise to ring the community midwives. 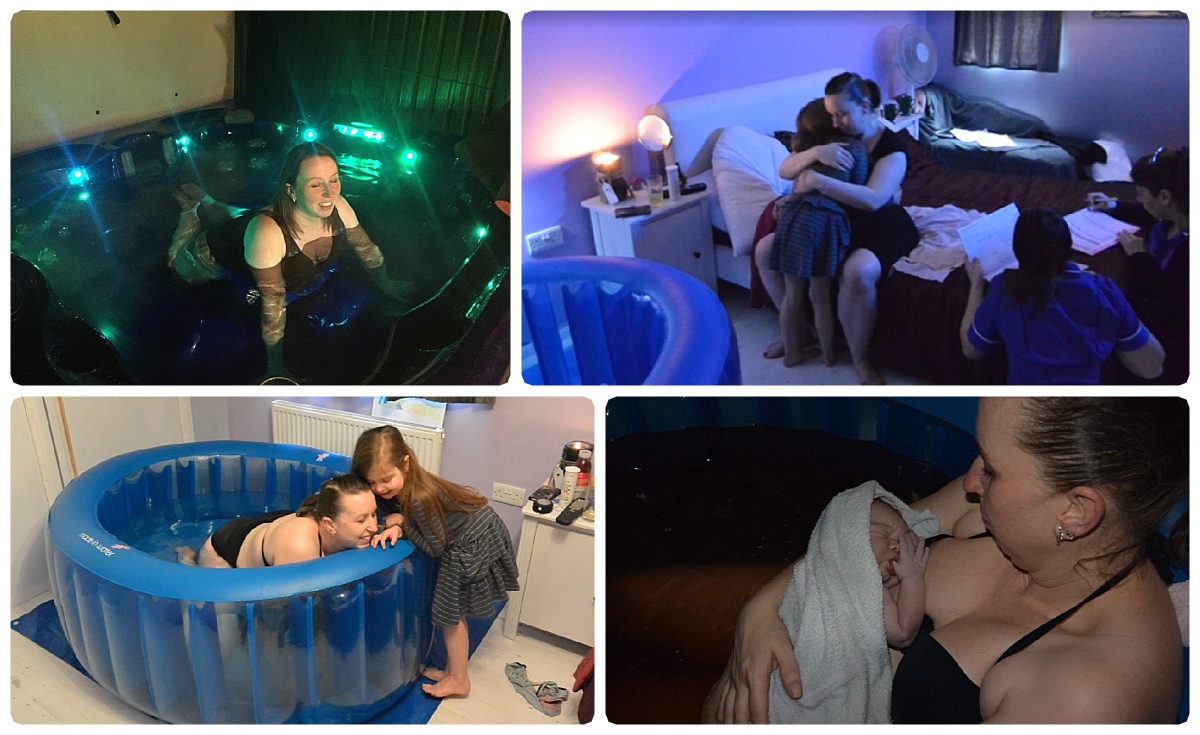 I’m still happy and smiling and pottering around the house. The midwives arrive at 9:30 and quietly come into our bedroom while I’m listening to the Hypnobirthing CD. They read through my (somewhat extensive) birth plan without disturbing me. I feel respected. I’m sat on the bed holding Eve. Her cuddles are the only pain relief I need right now.

Eventually the midwives conduct all the checks and everything is perfect. I’m 7cm dilated and feeling like a goddess, wandering around my home chatting and laughing with the kids and my Mum while Bob fills the birth pool up upstairs.

At 11:30 I slip into the pool enjoying the warmth and comfort from the water. I move instinctively, silently breathing through contractions then laughing with the midwives and my family in between. The children pop in and out sharing cuddles and pictures and take it in turns to feed me Haribos and sips of water.

By 1pm I feel like I need to be checked. For my own satisfaction. I lie on the bed and she delights me saying I’m fully dilated and the only thing holding me back is the fact my waters haven’t broken because the membrane is very thick. This was the case with both Eve and Harrison so I request she try and break them. It also gave me some reassurance that she can control the flow of waters and the further descent of babies head since I was still holding a lot of fluid. Granted it was just within the normal range but excessive fluid can cause issues if baby descends too quickly or the cord comes out first (cord prolapse), after all we had been through with the scan at 36 weeks and the polyhydramnios scare I didn’t want things to go wrong now so I felt by having my membrane ruptured was the right choice for me.

I quickly get back into the pool and I get a few minutes respite from contractions before at 1:40 PM the urge to push takes over. I am still so aware and no one is telling me what to do, it all feels so instinctive and natural. Bob is in front of me and the midwives are filling in paperwork and at 1:44pm I feel the head be born. I have lost my tongue in my concentration and I can’t articulate it to anyone, I wonder to myself if they’ve even noticed. It feels like forever but I hear them say “that’s the head”. a few minutes gap between contractions lets me breathe and at 1:47pm another contraction gently squeezes babies body, I feel him enter the water. I lean back and see him under the water, between 2 worlds – his haven in my belly and becoming Earthside. A split second felt like an hour and I grab him bum first and raise him to the surface of the water. His floppy body immediately comes to life the second he is on my chest. His skin colour changes from grey to pink like my daughters toy mermaid as she takes it out the warm water. Harrison and Eve where in the hallway, Harrison takes his big sister by the hand and they come and instantly reach out to touch their baby brother.

I’m in awe – at everything – at my body, my children, my baby, my husband, at life itself. I babble, struggling to find words other than a tearful ‘Thank You I don’t even know who it was aimed at – myself? My family? The midwives? Mother Nature? God? – everyone I think.

We agree on the name Thomas as the midwives drape soft warm towels over us. We lounge in the pool until it feels right to get out. Thomas doesn’t murmur, he sucks his thumb contentedly while he absorbs this whole new world around him muddled with the voices and sounds he already knows. Thomas feeds so instinctively. The cord is left intact for a good hour although the placenta still shows no sign of coming so I ease out of the pool hoping gravity will help. It doesn’t so I agree to try the syntometrine injection to ease it along. Finally it comes and Bob puts it in the prepared container ready for encapsulation. I’d planned placenta encapsulation to help with my milk supply and energy levels and to ward off postnatal depression.

I realise how very sore I am, I know I’ve torn but the midwives agree it’s something they can suture at home so no transfer to hospital – phew. The midwife and Bob and my Mum tend to Thomas while I’m sutured. Thomas weighs a thwacking 9lb13oz so no wonder I needed repairing!

By 5pm the midwives and my mum leave. I’m hungry and we order a dominos pizza, snuggled up in our family bed we have tea and plan an early night. Phones turned to silent. I want this one to be a secret a while. We’ll tell people in a few days.

Baby Thomas and I did our dance well, step by step with no one treading on our toes. It feels like a tale of old and right at that moment I absolutely was a goddess. . . Eating pizza! 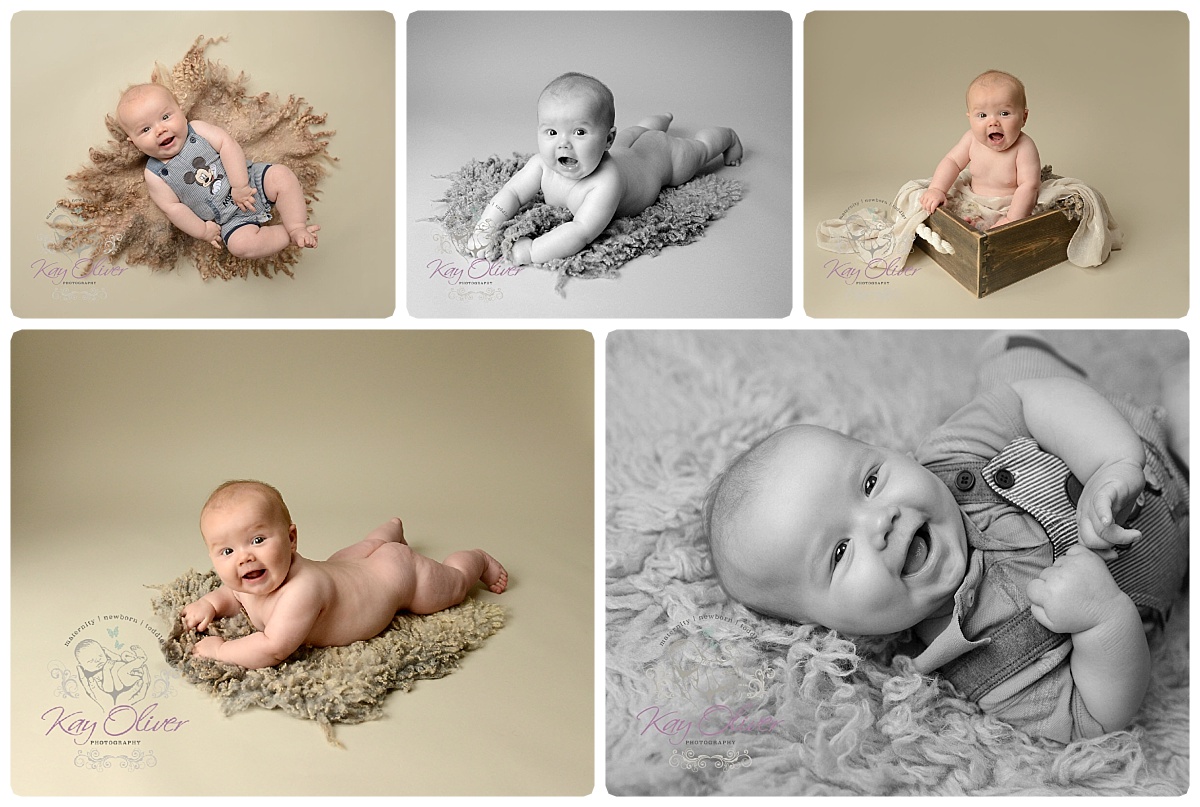